Yes! After a year off, we're coming back to the Francisco Grande for another week of fun in the  desert.  Come join us again!

Because our tug resources are limited, we are only allowing a maximum of 50 pilots, so you might want to register early.  You can register at AirTribune by clicking HERE.
at 6:51 AM 2 comments:

Reports on this year's competition can be found at the HG Outlanders blog - www.hgoutlanders.com.

Scores can be found HERE at the Airtribune website.
at 10:43 AM 34 comments:

Can you believe we've been doing this for 10 years now?  We can't!  But welcome back.  We're excited about another great year of desert flying.

Tough day yesterday.  After Mick's mix up with the dust devil, we discovered we were down yet another tug - the other trike.   Arrrrrrrg.  Getting so many gliders up and on course with only three tugs was going to be slow.  Miraculously, the universe placed a nice house thermal just downwind of the tow paddock and left it sitting there for the entire launch cycle.  Bobby, Luke and Jim could just drag each pilot to it, drop them off and quickly head down for another.  Launch went unbelievable quick and in fact we ended up finishing earlier than normal.  What luck!

The lift on course didn't cooperate quite as nicely thought and much of the field landed between the first and second turnpoints.  The sky shaded over in many places and we worried that no one would make it in.  Kraig and Filippo racing in nearly side by side was a very welcome sight.  They were followed just a few seconds later by Pedro and Jonny.  In the end, only two more (Davis and Tony Armstrong) made it, for a total of just six.

After having rain the first few days of the comp,  I think we had all forgotten how dusty things can get out here in the desert.  Yesterday was absolutely filthy and with little wind, everyone had the pleasure of browning-out for a few seconds on tow.  Gotta love the desert.

Luckily, once they're up an on course, the sky is bright blue and the air is fresh and clean! 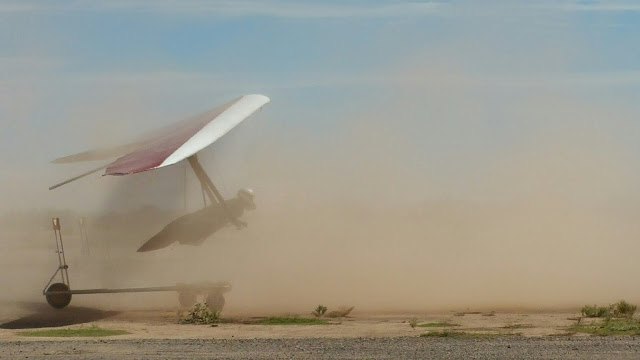 But see how nice and bright the sky is once you get out of that dust!
(photos by the Wolfman) 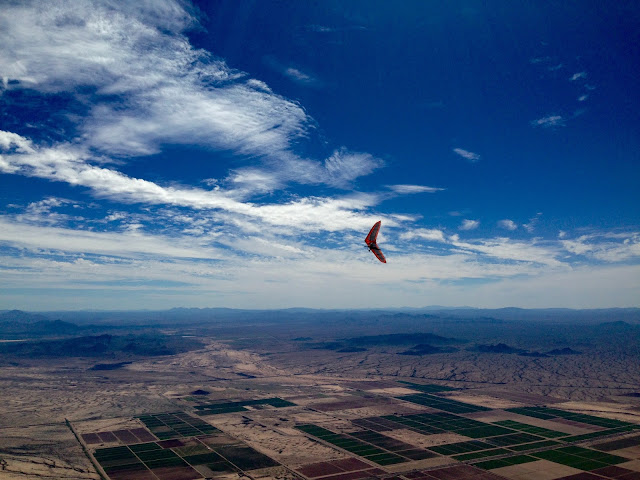 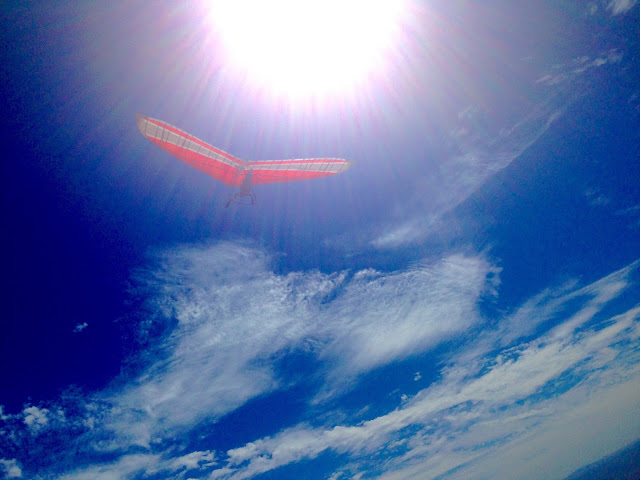 I always tell people that the dust devils here are more bark than bite.  The top layer of desert soil is so powdery that the smallest, weakest dusty picks it up and makes it looks like a monster.  Most of the time, they blow through and cause little more than a bit of coughing.  Today was one of those unfortunate exceptions.

We had a massive and extremely powerful dusty come straight through the launch line, hitting three hang gliders and a trike square on.  Luke in a dragonfly managed to power up and roar out just seconds before it hit the rest of us.  He said he was getting 1500fpm lift just 200 feet off the ground. Mick was out of his trike thankfully, and he and I had a hold of it.  As we took the direct hit, we held on until both of us were lifted off the ground.  I love Mick and I love his trike, but since I don't know how to fly trikes, I reluctantly gave in and let go about a foot off the ground.  I fell on my ass just in time to see Captain Mick go down with his ship.  He didn't let go and was slung around and thrown in the air like a rag doll before the trike came to rest on its side - he never let go.  Thankfully, Mick is totally unhurt - I can't say the same for his trike though :-(.

I thought we had been hit by the worst of it, but when the dust settled, I realized that there were three hang glider pilots on dollies, hooked into their gliders.  It took every crew person and bystander to hold on to them and make sure they didn't get airborne.  Scary stuff! 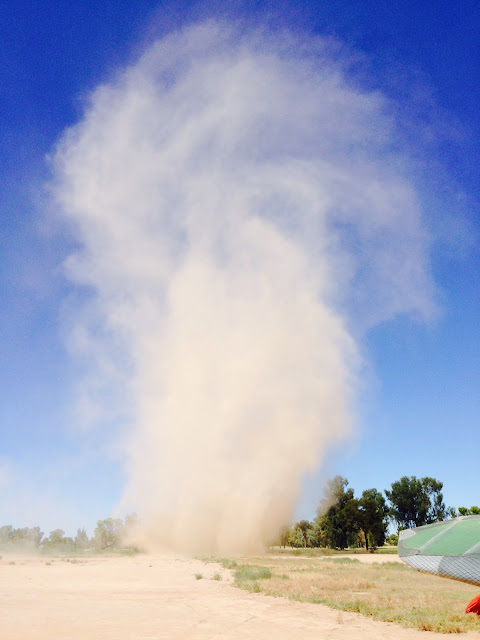 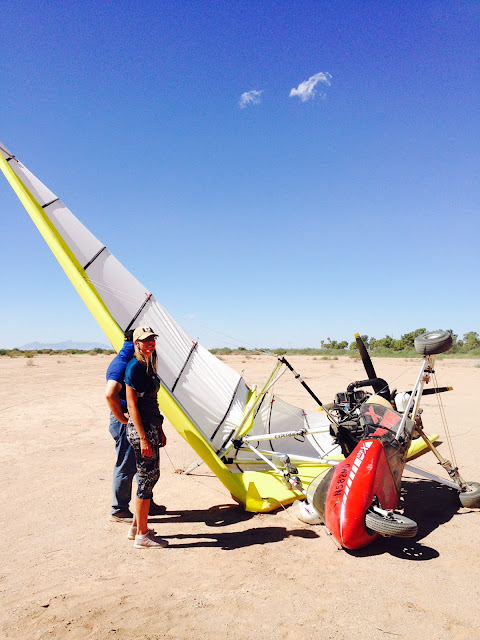 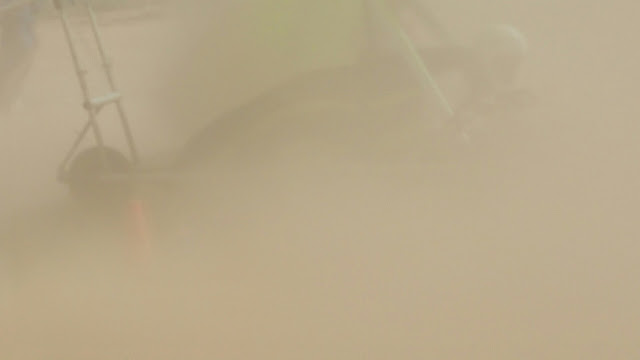 The weather the past few days has been anything but simple.  Each of the last three days, I believe most (myself included) did not expect to fly a task.  The meet director, Mitch, thankfully, has been more patient and optimistic and after a bit of waiting all three days, we've ended up with pretty good tasks.  We've had beautiful cumulous - a rare sight here - the past two days.  Unfortunately, those clouds came with some fairly high winds.  But, from today forward, the weather is looking much more like classic Santa Cruz Flats conditions - few clouds, if any, hot hot hot and light winds. 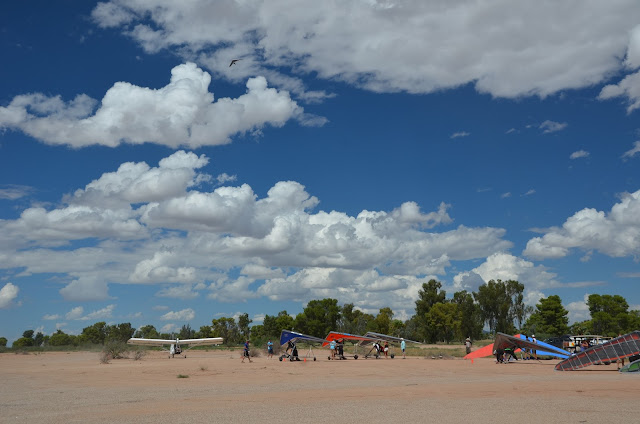